Current U.S. building codes and earthquake engineering practice utilize inelasticity in the seismic force resisting system to dissipate seismic energy and protect against collapse.  Inelasticity in conventional structures can lead to structural damage distributed throughout the building and permanent drifts after the earthquake motion ceases which can make the structure difficult if not financially unreasonable to repair.  A controlled rocking system has been developed which virtually eliminates residual drifts and concentrates the majority of structural damage in replaceable fuse elements.  The controlled rocking system for steel-framed buildings consists of three major components: 1) a stiff steel braced frame that remains virtually elastic, but is not tied down to the foundation and thus allowed to rock, 2) vertical post-tensioning strands that anchor the top of the frame down to the foundation, which brings the frame back to center, and 3) replaceable structural fuses that absorb seismic energy as the frames rock.

The controlled rocking system was investigated and developed through analytical, computational, and experimental means.  First, the mechanics of the system response were analyzed based on decomposing the system into a restoring force component and an energy dissipating component which were then combined in parallel to create a flag-shaped self-centering load-deformation response.  A large-scale experimental program was conducted in the MUST-SIM facility at the University of Illinois at Urbana-Champaign including quasi-static cyclic and hybrid simulation tests.  Nine specimens were tested representing three-story frames at approximately half scale.  The hybrid simulation tests included computational components that considered the destabilizing effects of gravity loads on leaning columns and the effect of the lateral resistance of gravity framing and interior wall partitions on the self-centering capabilities of the controlled rocking system.  These large-scale experiments validated the performance of the system, allowed the investigation of detailing and construction methods, provided information on frame member forces, and provided data to confirm and calibrate computational models.

After developing computational models that can represent system behavior, two computational studies were conducted.  A single degree-of-freedom study consisting of over 25,000 analyses was performed to investigate system proportioning including defining the amount of restoring force that is necessary to provide reliable self-centering in the presence of ambient building resistance.  A multi-degree-of-freedom study consisting of approximately 1500 analyses was performed to investigate the application of the controlled rocking system in different configurations, heights, and system proportioning.  This study was also used to investigate the probabilities of reaching limit states for earthquake events with varying recurrence period.

This work was part of a multi-institution, international research project to develop the controlled rocking system for implementation in practice.  Other phases of the research included development of steel fuse plates at Stanford University, large-scale shake table testing at E-Defense in Miki, Japan, related computational studies, and development of displacement based design procedures.

The experimental and computational studies demonstrated that the controlled rocking system for steel-framed buildings can satisfy the performance goals of virtually eliminating residual drift and concentrating structural damage in replaceable fuses even during large earthquakes.  The results of all phases of this work were synthesized into design recommendations which summarize the practical application of this system to building structures. 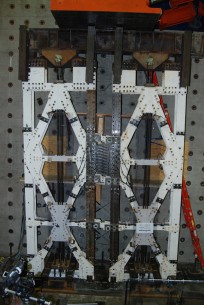