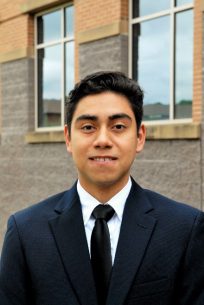 BS in Civil and Infrastructure Engineering from George Mason University

With the increased push towards performance-based design, there is a need to understand and create more resilient building envelopes when subjected to natural hazards. Since architectural glass curtain walls (CW) have become a popular façade type, it is important to understand how these curtain wall systems behave under extreme loading including the relationship between damage states and loading conditions. This study subjects 3D computational models of glass curtain wall systems to deformations and loads that represent earthquake or hurricane events to support fragility curve development that will in turn aid in performance based design.

This computational study uses the commercial software package Abaqus to develop refined finite element models with solid elements having nonlinear material.  Careful consideration was given to the boundary conditions and interactions between curtain wall components including: contact conditions, friction, spacer blocks around the glass panel, and clamping force due to screw tension.  The modeling approach is validated against both an in-plane racking test and out-of-plane wind pressure test from the literature to show the model can capture in-plane and out of plane behavior effectively.  Particular damage states that can be captured by this 3D model include: slipping of the glass panel within framing pocket, initial glass corner to framing contact, initial glass cracking and final glass cracking. The validated model approach is then used to create a larger CW model that can be subjected to generalized in-plane displacements and out-of-plane loading to support fragility curve development.